The Presidents Cup is one of the best weekends in golf. There’s patriotism, smiles… and streakers? While the tournament may have lacked drama from tee to green, there is plenty to talk about after this weekend.

Here’s a recap of the weekend in case you missed anything:

This was the third straight Presidents Cup in which Woods won the cup-clinching match. The US again proved to be too good to beat. When you look at the rankings it’s easy to tell why. The golfers from the US side are no doubt the best in the world and they proved that this weekend. 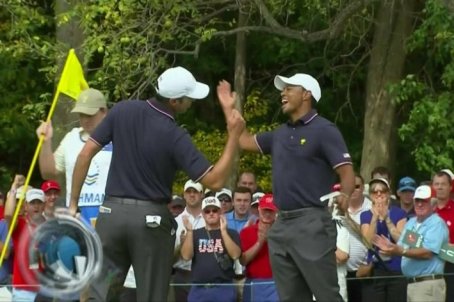 Tiger and Kuch get along. They play well together. AND they have an interesting new handshake. They used the “Jazzy-J and Fresh Prince high five as their celebration for the weekend. It may have been a bit awkward but it’s great to see the players interacting and laughing on the course.

During the rest of the tournaments of the year its every man for himself and we don’t get to see the “fun” side of most TOUR players. It’s refreshing to see these guys working together, cheering for each other, and even coming up with some fun celebrations.

The “Support the Troops” Streaker 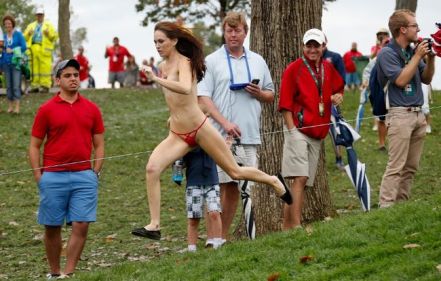 A female streaker, named Kim (@PresCupStreaker) ran onto the 18th hole on Sunday at the Presidents Cup at Muirfield Village Golf Club in Dublin, Ohio. Kim ran out wearing only an American flag, a red g-string, and stickers that read “Support Our Troops”. Kim decided she wanted to make streaker history- “I did some research on the top streakers of all time, and they seemed to be all men.” She celebrated her place in history by hitting the town with Grams.

How do you think a 300 pound man would have been punished?